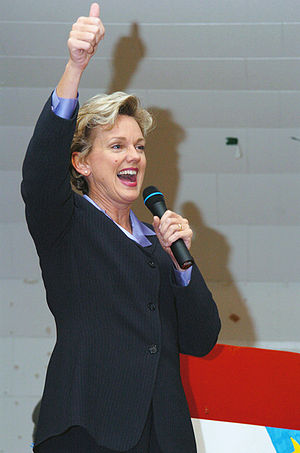 I am reading two books right now.  One by Governor Daniels of Indiana and another by former Governor Jennifer Granholm of Michigan.  Governor Granholm talks quite a bit about the loss of jobs in manufacturing in her State to outsourcing.  In fact, her last election against Dick DeVos – the former Amway CEO – she let him have it during her campaign for outsourcing jobs to China.  Certainly, the subject for a future blog post.

However, something else caught my eye . . . Governor Granholm’s love for MBO.

“As a big believer in management by objectives, I loved using  the State of the State speech as a blueprint for the year.”

– from A Governor’s Story – Governor Granholm

There is a correlation between the loss of jobs to outsourcing and MBO, but I won’t make it in this post.  They are both wrong behaviors and outsourcing you can find plenty of posts why it isn’t typically saving money.

Organizations and governments are still using MBO – shocking?  Not really.  I still see it in many organizations, once a bad idea . . . always a bad idea.

Peter Drucker invented this thinking in 1954, W. Edwards Deming rocked the world when he spoke about MBO as one of the evils of management (as practiced).  Closely related to MBO is SMART (Specific, Measurable, Agreed, Realistic and Time-related) and a Balanced Scorecard.  Targets come along with these thinking methods.

First of all, Dr. Deming understood that when you provide objectives and targets by function you get sub-optimization.  Meaning if you optimize each functional piece you miss the inter-dependencies and create a system works against itself.  This creates waste.  For example, you often see departments vying for resources focused on what they can get in resources for themselves. Artificial competition is produced and the loss to the system is great because we do what is right for the department, but not right for the system.

Information technology seems to get much of the money in organizations.  Yet IT cannot create value, it can only add value to the relationship between customer demands and work.  Unfortunately, too many organizations don’t get that IT, HR, Finance and other supporting areas aren’t meant to create a profit for their department – they are there to enable the value creating relationships.

With MBO, we get management and worker focused on the wrong things.  Hitting the target laid out in the objective (remember SMART).  The flow is interrupted by the functional separation of work as each piece tries to optimize itself.

– W. Edwards Deming (from Out of the Crisis)

“Management by Fear” was the Deming phrase that replaced MBO.

Governor Granholm is a Harvard graduate.  Peter Drucker taught there.  Harvard, with all its money has become the poster child for bad theory.  Smart people, wrong method.

As voters, we need to ask candidate, “By what method?”  As managers, we need better thinking about the design and management of work – devoid of MBO and targets.