Tuesday, June 2, 2009 by Tripp Babbitt
Assuming most readers of this blog have some familiarity with systems thinking from my previous 100+ blogs may be a stretch, but the question came up a few times last week as to what is preventing companies from achieving business improvement by adoption of new thinking?  Let’s start with one Ignaz Philipp Semmelweis a mid-1800s physician that worked in a Vienna hospital where almost 1 in 3 women would die after childbirth of "childbed fever."  The reasons for the deaths were things such as "wounded modesty", "guilt and fear complexes", "cosmic influences" and "sudden changes in weather and temperature."  Dr. Semmelweiss wouldn’t buy any of it and set out for a cure.  Through a freak occurrence a 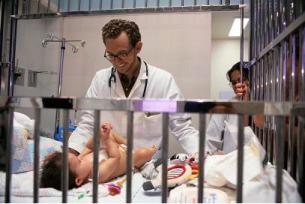 physician friend died after accidentally cutting himself dissecting a corpse.  the symptoms were strangely similar to that of childbed fever.  With no knowledge of infection at the time, Dr. Semmelweiss was able to conclude that physicians were commingling infection one patient to another through the physicians themselves.  His discovery was nothing short of brilliant, he found that by having physicians and other care givers wash their hands the death rate spiraled down to almost zero.  But Semmelweiss ran into a problem (even with data) he was labeled a "nut case" because of his insistence on hand-washing.  The physicians of the day just couldn’t accept that they had been killing their patients because of their lack of hand washing.  Political pressure dumped the hand washing, the death rate went back up and Semmelweiss went crazy.  Having a better way and knowing that changing thinking is hard for people to believe . . . if it was that easy they would have discovered it by now. Thus, the "Semmelweiss Syndrome" that I am coining right here in this blog.Individuals and organizations have invested heavily into training for Six Sigma, Lean, TQM, ISO and other organization change management programs.  I can’t say they haven’t improved things, but as a "reformed" Lean Six Sigma Master Black Belt I can only say that we are doing the wrong thing righter.  Until we begin to address the fundamental thinking problem of command and control thinking, we stand little chance of sustainability or large leaps in improvement.The organizations that deliver the training are also a barrier, they are doing quite well thank you.  The last thing they want to hear is that their training is outdated and there are better ways to achieve improvement.I don’t know what the future holds, I am hopeful that I don’t wind up like Semmelweiss.  Despondent (and (somewhat mad) he wound up cutting his hand and thrusting it into a corpse, within three weeks he had died of the same disease he had tried so hard to defeat.Tripp Babbitt is a speaker, blogger and consultant to service industry (private and public).  His organization helps executives find a better way to make the work work.  Download free from www.newsystemsthinking.com "Understanding Your Organization as a System" and gain knowledge of systems thinking or contact us about our intervention services at [email protected].  Reach him on Twitter at www.twitter.com/TriBabbitt.

Comments for Semmelweiss Syndrome: A Barrier to Business Improvement

Wednesday, June 3, 2009 by Roy Madron:
Yes, poor Semmelweis is a warning to us all. The hand-washing story is an illustration of Senge’s insistence that to be successful systems thinking as one element in ‘an ensemble ‘of four other disciplines. Which of course fits with Kuhn’s description of a ‘paradigm shift’ requiring more than just the articulaiton of a new theory. It reminds me that I have also to write that blog about learning from processes that lead to the mushrooom growth of religious cults in the Americas and elsewhere in the world.